I’ve practised yoga in many places around this globe, from dusty church halls to golden sandy beaches, Hindu temples to bustling city rooftops. Where you practice yoga has a huge effect on the type of practise you will have, will it be gentle and devotional or will it be energetic and filled with life?

One place I’ve not yet had the pleasure to practise yoga is New York City. A polar opposite location to the shalas of India, yet a place that has yoga running through it’s veins. Can anyone benefit more from a regular yoga practise than a 21st century New Yorker?

Geydi is a yoga teacher who has lived in New York most her life, she’s from the Bronx and has recently opened a new studio where she has opened her doors to share this beautiful practice with all. She offers yoga classes to everyone and kindly shares her New York Yoga experience with us here.

NYC has more than 300 yoga studios, not including the Yoga Classes at Gyms and Boutique Fitness Studios; and we keep expanding the community of yoga enthusiasts pursuing tranquility, awakening in the middle of this stressed, crowded, sleepless urban jungle we call home.

Yoga is about awakening and self consciousness. In Sanskrit Yoga means “The union of any form of connection” – So it’s like “The conscious connection with self”. We adopted the traditional Yoga from India, but we keep twisting it here little by little, every single day. 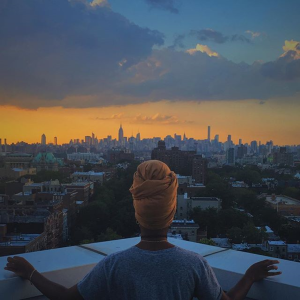 In New York, we leave behind the four walls of the studio and enjoy big scale yoga events. As the world already knows, we are into yoga festivals, and big-scale wellness events; as Americans we love outdoor celebrations and favor more of a concert type of experience. We like to meet new like-minded people, soulful music, learn something new through events at different places. We like to follow a great celebrity instructor from Instagram; but sometimes NYC Yogis get together for an important cause of yoga and activism, to produce an impact in our community and make a change.

In NYC we like to elevate everything, even our yoga, and now we literally elevate our practice on the rooftop.  It’s becoming super trendy, we get the amazing downtown view, and we don’t have to deal with the difficulty to get permits for the parks. One of our instructors, Racheal Weathers, is the Queen of Rooftop Yoga in NYC.

Last year we hosted the Beer and Bend Yoga events from the East Gun Hill Road Brewery Company in the Bronx, NY; sometimes the event took place inside the studio, other times the event happened in the facilities of the brewery company.

Many times it’s hard to avoid the noise in this concrete jungle: ambulances, trains, loud people are everywhere. I think this is why yoga is so popular in NYC, to be able to unplug from the crazy media, demanding jobs and hectic social lives. This could be why New York City is the birthplace of headphone yoga. In this way you can have a large class, in places where you are not permitted to amplify sound. The headsets are battery operated and allows yogis to move freely, to adjust the volume to their preference. Another benefit is that even participants at the back of the studio get to hear the instructor clearly. An instructor is present in the studio, but doesn’t have to be amplified, because you can adjust the volume of the voice and the music, right on your headset. The noise-isolating headphones also block out ambient noise, minimising distractions. The inspiration to this “Sound Off Yoga “ happened when the inventor of this trend attended a silent disco in Israel five years ago, where dancers were using similar headsets on the patio of a nightclub. Participants say their wireless headphones stay on even during inversions. 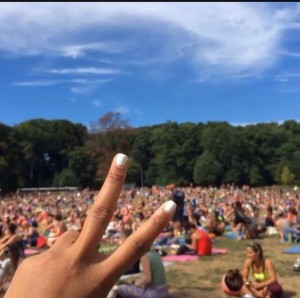 Each year, more than 10,000 thousands of yogis from around the world travel to Times Square to celebrate the Summer Solstice with free yoga classes in the heart of New York City. On the northern hemisphere’s longest day of the year, you can find your center at “the Crossroads of the World” in this global celebration with classes all day.

Outdoor Yoga events for causes of social impact are also a theme now in the NYC Yoga Lifestyle; although yoga has become very popular as physical fitness, the essence of yoga goes deeper than just exercise, taking into account principles such as kindness and selfless-service known as “Seva” in Sanskrit. Through yoga people embrace a lifestyle that leads to peace for the individual, but can also inspire the individual to become an active agent of social change. So yes! The LGBT Pride Week, for example, where Yoga was present in multiple events.

What about 9/11 Memorial?! Wanderlust 108, the world’s only mindful triathlon, happened in Prospect Park on Sunday, September 11th 2016 with more than 8,000 down dogs.

It was a field day for the mind, body, and soul; starting the day with a 5K (run/walk), followed by a DJ-powered yoga flow class, and a blissful guided meditation. A little sweat, lots of high-fives, and a deep chill. It was a rainy day but, Wanderlust 108’s message to create a global community around mindful living, was still a success.

“Mindfulness is the antidote to the human condition… our mindlessness”